This was billed as the “Wings of Heaven” – live Tour. So what do you get for your money? Two sets by one great band. The first set was old and new stuff, about hour and ten minutes, the second set was the classic album Wings of Heaven in it entirety to celebrate its 20th anniversary. 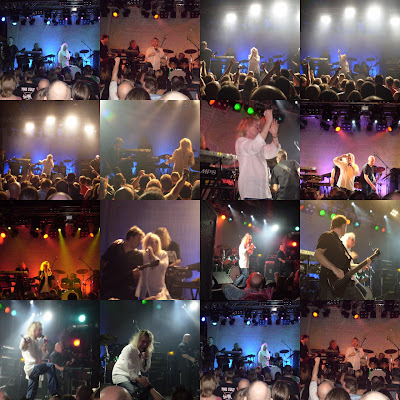 Before we look at the twenty year old album, let look at the current CD - Princess Alice and the Broken Arrow. It has been suggested that this will become a classic as well, I have to say I had a few doubts. I’d not played it since May when they toured last so I gave it a play as refresher before this show, and wow, straight back into the groove, yes this CD can be mentioned in the same breath as Story Tellers Night and Wings of Heaven, I just don’t think they will be doing an 20th anniversary show for it somehow in 2027, I’ll be 62!!!!

Onto the gig, starting with When We Were Younger from Princess Alice, then Back Street Kid, other tracks from Princess Alice were, Eyes Wide Open (I think), Like Brothers We Stand, Out of the Shadow, and Dragons are Real. From Story Teller’s we got How Far Jerusalem, Les Morts Dansant and All England’s Eyes add to this lot Vigilante and round it off with Kingdom of Madness and you’ve one very happy gig goer, but wait we are only half way through. Is life really this good?

Yep it is, quarter of a hour later Magnum are back with Wings of Heaven in full. The set was super, but highlights for me were Wild Swan (one of the many atmospheric songs they played tonight) and the 10 minute epic Don’t Wake the Lion (Too Old To Die Young) which was just breath taking, they need to try to fit this into the normal set. Time for one encore - Scared Hour just over an hour again. I’d clapped, swayed, jumped and sung along to each every song loving every minute of it.

The band were brilliant all the way through, but special mention must go to Bob Catley who was awesome conducting the audience from the first note to the last. I’m not sure what all the funny hand and leg movements mean (at one point I thought he was directing a plane into land) but it was great. There should be a Bob Catley exercise video!!!!

If you’ve not checked at Princess Alice for a while give it another spin, you won’t be disappointed.

Best gig ever, well that is a difficult one, if it wasn’t it was very very close!!!
NH
Email Post
Labels: Gig Review