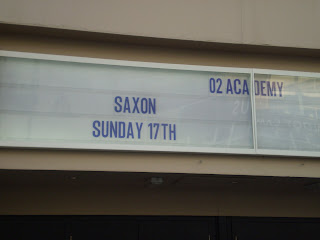 I had to be at the 02 Academy at 4 0’clock for this on as I attending the sound check as part of a charity fund raising for Childline and Nordoff Robbins Charities. We had a listen to five or so songs at the sound check ad then did the meet and greet with the band. All in all a great experience (and for a good cause too).
Fury UK put in a blistering set to open up the show. They played I See Red, Fall From Grace, Alien Skies, Manslaughter, Call to Arms and rounded it all of with the great Death by Lightening. They seemed to go down really well with the crowd so let’s hop that the future is looking bright for this band because they really deserve it. They play a headline show at Bradord Rios on 27 May 2011.
Next up were Wolfsbane, who the crowd went crazy for. I have say I only knew a couple of Wolfsbane songs, but I really enjoyed their show. Blaze was his usual self, whipping the crowd into a frenzy all through the set. At one point he was climbing on the lighting rig. Great fun, they should be back on tour in November so keep an eye open for the dates.
Opening up tonight with Hammer of the Gods, Saxon received a great reception. The set also included three other songs from the new CD “Call to Arms” which is out on the . They were Back in 79, Call to Arms and When Doomsday Comes. They all seemed really strong songs. That slotted in nicely to the great two hour set which included Heavy Metal Thunder, Man and Machine, I’ve got to Rock (to Stay Alive), Demon Sweeney Todd, The Bands Played On, Denim and Leather, Crusader, 747, Motorcycle Man, To Hell and Back Again, Play it Loud, Princess of the Night, The Eagle has Landed, Solid Ball of Rock, Dallas 1PM, Strong Arm of the Law and of course Wheels of Steel.

The whole show ran from 7:30 to 11:00 with just short gaps for the change of gear, so at £17.50p a ticket I think that is incredible value. Well done to all concerned for a great evening out. 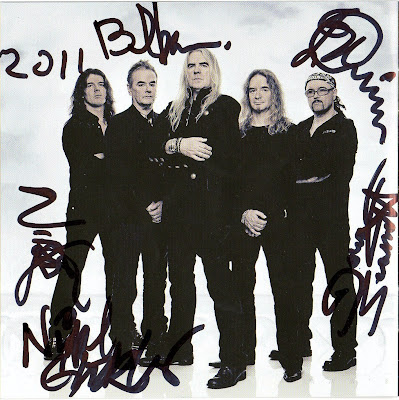