The mighty Rainbreakers release their striking new single ‘Ashes’, taken from the band’s forthcoming new album to be released this year.

Defying simple pigeonholing, Rainbreakers make carefully-crafted British Rock that looks forwards as well as backwards, and inwards as well as outwards. Music that credits its listeners with intelligence and isn't shy of putting its soul on the line. Taking influence from the late 60’s and early 70’s great Rock bands (Led Zeppelin, Free) and infusing it with a modern sense of Soul and Blues.

"Built around the persuasive vocals of Ben Edwards, the urgent guitar of Charlie Richards and a skintight rhythm section, ‘Ashes’ is an exciting, original piece… to grab newcomers to Rainbreakers by the collar,” writes respected journalist Paul Sexton.

Rainbreakers — Midlands-based, four-piece band, brimming with creativity, talent, not to mention’s Charlie’s award-nominated guitar mastery — have been consistently pleasing ears and firing up fans’ hearts and minds during their remarkable rise over recent years.

Directed by the incredible Morgan Tedd at Erase Creative, the video bathes the Rainbreakers in red then blue light, cutting between them and a man literally at the end of his tether, dragging a deadweight behind him, giving the themes of the song vivid and physical form. All to Charlie’s addictive riffs, Ben’s engaging vocals, and Ash and Sam’s spot-on bass and percussion.

Ashes, is now available worldwide across all major streaming platforms

"Exciting, original British Rock to grab [listeners] by the collar"

"A breath of fresh air" 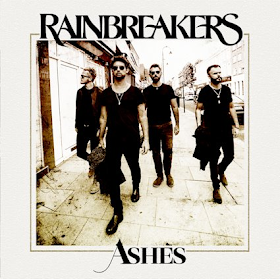