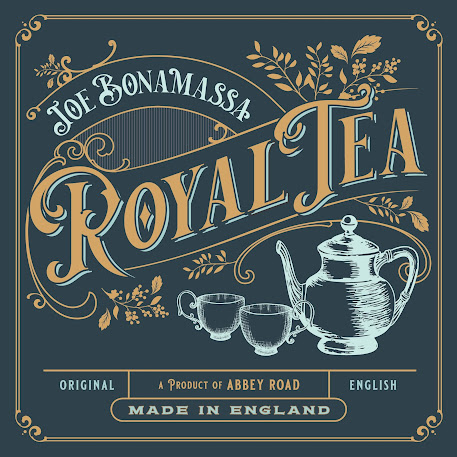 Thank goodness in the year of 2020 we can still rely on music to be the shining light in a time where we all need some hope and joy and with Royal Tea Joe Bonamassa resets the standard that he sets every time he records.
These ten original tracks were co-written by Joe and a cast of homegrown notables including former Whitesnake guitarist Bernie Marsden, ex-Cream lyricist Pete Brown and national-treasure piano man Jools Holland. “Writing this record in London has done its job,” reflects Bonamassa. “It really does sound inherently British. Bernie and I, we finish each other’s sentences. We’re cut from the same cloth.” Bonamassa’s long-standing producer Kevin Shirley and regular touring band flew in for the recording sessions, which included Anton Fig (drums), Michael Rhodes (bass),Reese Wynans (keys) and backing vocals Jade MacRae and Juanita Tippins.
Recorded at the world famous Abbey Road studios it starts with Jeff Bova and his orchestra giving When One Door Opens some real depth and Joe's early vocal is backed up by Jade and Juanita before the band kick in.Mid paced with Joe guitar add libs and wonderful light and shade with Kevin Shirley's production superb giving every instrument a chance to breath. The main guitar riff dips in and out before mid song Anton's drums kick in military style and Joe's hits us with probably the heaviest guitar riff we have ever heard from him. More vocal backing and Michael Rhodes fuzzed up bass line alongside Anton's drum rhythm only add to the musical majesty and then Joe's guitar solo takes us off any scale ever written. The song then fades out with Joe's whispered vocal line and you want to press play again. A stunning opener.
The title track Royal Tea has a stop start guitar riff and drum rhythm before backing vocal excellence with the girls only singing Royal Tea. Joe showing off his vocal tone and the hard work he has done giving him another world class instrument. His voice.
Why Does It Take So Long To Say Goodbye sees the pace slow for a ballad with Joe's vocal held for every note and emotion dripping from every word and his guitar add libbing weeping too.
The pre chorus sees vocal backing and his guitar solo after a band workout sees notes flying to the skies. Superb and you can imagine in the live setting it going off to new places.
Lookout Man starts on Michael Rhodes heavy bass line which underpins the whole song and another heavier guitar riff and harmonica add on's too. Backing vocals dip in and out of the pre chorus and Anton Fig's drum rhythm drives the song upwards and never ceases to amaze with his power and a guitar solo that you rarely hear from Joe with a dirty sound. Hard rock at it's finest.
Savannah is pure Americana with acoustic guitar and Reese Wynans keys higher in the mix and Joe's vocal soulful and a wonderful chorus too. Such a contrast from Lookout Man and shows the depth of musical talent and a great co write for Bernie Marsden.
High Class Girl is another Marsden co write that is built on a short sharp guitar riff and shuffle with Reese again higher in the mix. Superb chorus with backing vocals and the guitar riff cutting through the mix.
A Conversation With Alice was the first single that showed us some joy mid lockdown. It starts on a big bouncing and breezy guitar riff that slows for the verse and backing vocals add to the depth in the chorus alongside Joe's melodic tone.
I Didn't Think She Would Do It sees the pace increase with Joe's initial wah based guitar riff and Anton again shows his world class drumming that was nearly not on the album after he broke his ankle as recording was about to start. Joe's mid song guitar solo is given time to roam with wah passages and a band riff work out. Urgent and sure to be a fan favourite in the live setting.
Beyond The Silence is an epic number with a feeling of Dust Bowl or Self Inflicted Wounds. Joe's breathless vocal with the song building to the chorus from quiet beginnings and then dipping back down again for the next verse. More light and shade shows how the band dynamics are built from years of live shows and the art of knowing each other so very well.
Lonely Boy is a Joe classic straight off the bat. Anton's stunning drum rhythm driving the song with brass everywhere and Reese dipping in and out and Joe at times high pitched vocal and soloing glorious. An end of set number to get the crowd to their feet and ends the album on a high.
Royal Tea is a glorious addition to Joe's catalogue and a shining beacon in this current climate we all live in.
Thank you Joe and his band and if that wasn't enough their is a Target version in the US with 2 more Bernie Marsden co writes available too.
Wonderful.
Joe Bonamassa’s new album “Royal Tea” is released by Provogue/Mascot Label Group on Friday October 23rd. 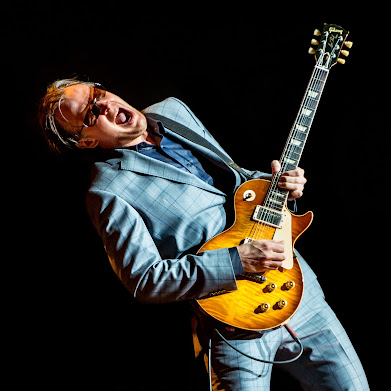