The Outlaw Orchestra deliver a triple newsflash. First up; The band are releasing a new mini-album; Powercut, out March 26th. Secondly: They have released the single ‘Rattlesnake Sour’, out today, 12th March.  Finally: the band premier their video for ‘Rattlesnake Sour’.

“When we're not on the road,” adds singer/guitarist Dave Roux, “we sure miss the stage and hanging with our outlaw buddies. So, we've taken a handful of our favourite songs and played them like we do in the backroom, with a few cold ones where there are no wires, amps, candles for light and a stripped back sound. When the bottles run empty, our country roots come out, usually in the small hours".

‘Rattlesnake Sour’ takes its name from a drink the band concocted on the road best explained by drummer Ryan Smith: "Take any good cooking whiskey add a generous squeeze of lime and a spoonful of honey, stir quickly, then slam even quicker. It sure soothes a singing voice, first thing in the morning".

"Back in February Dave and I were chatting late in the evening, we'd both had the same thought that day; to record one more track, a ballsy rocker for our backroom session album’.

"What about our drink: Rattlesnake Sour?” suggested Dave, “Put music to the ingredients!"

"The problem was” says Pete, “we had literally two days to finalise mixing the recordings that we'd already finished, send them off for mastering, get them back and have the CDs pressed before the cut-off deadline with the distribution company."

"Seriously,” said Pete to Dave, “We have until morning to get this done!".

Dave pulled an all-nighter "That’s not hard," he explained, looking somewhat shattered, "I rarely sleep; maybe a couple of hours a month, even if I don't need to.” He recorded bottleneck slide on his dobro guitar and by 6am he had sent his guitar parts and vocals to Pete and Ryan. By late afternoon, Ryan had laid the drums down in his garage studio. Likewise Pete had played the bass, pedal steel and banjo parts at his home studio. By 5pm the following day, the band were online with engineer maestro David Evans, mixing it down, and by teatime it was on its way to mastering with the other tracks!

‘Powercut’ is out 26th March with digital and physical pre-orders available from 19th March.

It follows on the coattails of The Outlaw Orchestra’s acclaimed debut, ‘Pantomime Villains’.

“Somehow, from somewhere,” Rushonrock mused in amazement, “The Outlaw Orchestra have outshone the opposition. David Roux and his merry men have reinvented the wheel. They’ve rewritten the rock and roll rulebook.”

"This is The Orchestra at their finest,” said Metal Planet of their debut album, “and ably shows the diversity and honesty of their sound and how they have carved out a well-deserved place in the forefront of the emerging rock scene"

"Their sounds are as authentic as a slice of homemade apple pie and their songs come packed with clever rhythms, intricate guitar entanglements, agility of voice, and fluid finesse in musicality," said Neil Mach, editor-in-chief of RAW RAMP.

Cue up your first shot of ‘Rattlesnake Sour’ and head to The Outlaw Orchestra’s website to preorder the rattler’s parent EP: a fine collection of striped-back, raw Outlaw goodness.

The single can now be downloaded/streamed on all digital platforms. 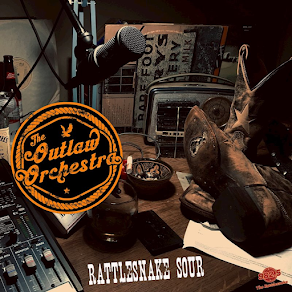