Let's start by shining a giant spotlight on that elephant over there in the corner of the room... If you're expecting to read a review including the main stage headliners, then move on, nothing to see here coz it ain't happening... as frankly Mott The Hoople and The Cult aren't my cup of Trooper ale, so we went elsewhere when they were on..

I could lie and say I danced All the Way from Memphis with All the Young Dudes, shook my head to Lil Devil,  strutted to She Sells Sanctuary and raised my hands to the skies during Fire Woman... But I didn't. If it helps you to say I did then fine,  I did, they were great weren't they?

This review will be of the bands we saw whilst wandering around the site, soaking up the vibes, enjoying the real ale, the lovely food and the sunshine...

I genuinely love Ramblin' Man Fair as not only is everyone friendly and respectful of their fellow giggers but you get such an eclectic mix of people: bikers, country dudes and dudettes, old blues blokes and beauties, more tattooed lovelies than you can shake an ink covered needle at, hipsters, the little old lady from down your road (you know the one), hippies, classic rock fans, entire families, steam punks and those people that wear black t-shirts with airbrushed pictures of wolves and carry a drinking horn. 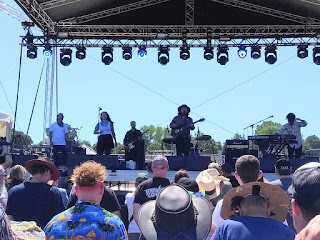 Thomas Wynn and the Believers were the first band I saw on the country stage.. like a lot of RMF's branding they aren't really country rock, more blues but none the less very good indeed,  an optimistic start to day one when, frankly there was only one band I wanted to see.

Nipped over to the Rising Stage to catch Gorilla Riot.  They too were very good, and had drawn a sizeable crowd, I'll be looking for more from them.

Whilst I think about it, the new site layout is good from a punters point of view.. the up and coming bands being given a full stage and a whole day in what then becomes the Prog Tent on day two, and the Country/Blues stage being moved out of the tent into it's own area.  The only complaint is that there was too much sound bleeding from one to another - you really felt for some artists trying to provide an acoustic song only to be fighting with some shouty rock band elsewhere. 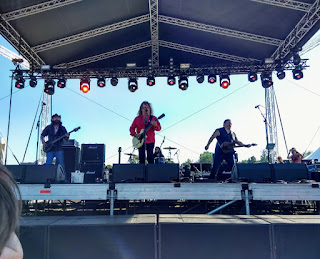 Back to the Country stage for Skinny Molly containing ex-members of Skynyrd and Molly Hatchet. I must admit that, despite their pedigree (I'm a southern rock boy at heart) their albums didn't set my world on fire..but, their set was great, really good Southern Rock fun.. and they finished with Freebird complete with 8 or 9 false endings!

A dash to the main stage for the highlight of day one (and the only band I was actually looking forward to in advance) : The Cadillac Three.  They didn't disappoint and put in a blistering set with main man Jaren Johnston summing up their style perfectly when he said 'on this stage you got Rock, you got Country, and then you got us' 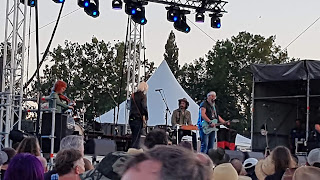 A meander back to the Country stage via the food and beer tents to see Steve Earle and the Dukes play the Copperhead Road album in it's entirety and in sequence for the only time in Europe. I loved that album when it came out 30 years ago..and it hasn't lost any of its charm or power. Brilliant.

End of day one music-wise for us.. good music, beautiful weather, lovely people, great beer and good food..and pleasantly surprised by what I'd heard today.

Day two.. even hotter... there are people around today that look like lobsters dipped in strawberry sauce and covered in ketchup. 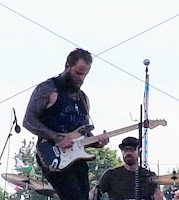 The Blues stage was running late (which raised some pointless complaints on social media and some severe tutting in the crowd.. it's our British way) ..which meant that I missed Tyler Bryant as he now clashed with The Kris Barras band (hence the aforementioned tutting).

Take my advice if anything, and I mean ANYTHING in your life clashes with The Kris Barras band, just ditch it and see Kris: your kids birthday, your wedding or that life changing job interview.. ditch it.  Probably my set of the day, they rocked it with tracks like Hail Mary and Propane.  Superb. 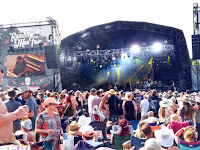 Off to the Planet Rock stage to see Sons of Apollo which is chock full of talent, including some Dream Theatrers, a G&R guitarist, Billy Sheehan and a Soto.  Ten minutes in my other half said 'What sort of music is this?'. 'it's Prog Rock'  I stated...'Its a f*kin racket that's what it is!' she replied.  Sadly I think she was right... Not for me I'm afraid. 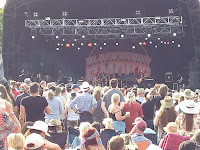 Blackberry Smoke brought the crowd to life with their brand of Country Rock but started to veer into some shoe gazing jamming at one point, but rescued it just in time by segueing into a Beatles song.. phew that was close... that's okay for a Blackberry Smoke gig (in fact it's excellent!), but a festival audience might need a bit more of the "Don't Bore Us, Get to the Chorus" approach.

Steel Panther were amusing for the first 5 minutes then it kind of got stale ..

As I've seen Halestorm loads of times  (The other half went to watch them- her review: 'I like them but Lzzy was a bit too shouty today'),  I ventured over to the Blues Stage to witness the mighty Gov't Mule.

Warren Hayes was on fine form and the ever expanding crowd soaked up the country rock, blues, jazz fusion .. they often go into extended jams but have a knack of bringing it back from the brink just in time. It was great to sit on the grass as the sun was setting and just soak up the Southern vibes. Charlie Starr from Blackberry Smoke joined them on stage for a track and for the last two songs of the night they were joined by Bernie Marsden who helped them tear through Free's "Heartbreaker" and of course "Ain't No Love (in the heart of the city)".

I wandered back to meet up with the missus outside the Prog Tent. "How was Fish?"  "very good, but he's really angry". Apparently a late start and a Cult curfew didn't go down too well.  I might get her to do the reviews in future, she doesn't waffle as much as I do.