This is the gig I've been waiting around 35 years to go to.   Other Eagles gigs have come and gone, then more recently covid cancelled.. so decided to head to Anfield to see them and Little Big Town.
I was lucky enough to see Little Big Town at their residency at The Ryman in Nashville a few years ago, and I class that in my top 5 gigs for various reasons. (being in Nashville helps!).
Their set in Liverpool was a perfect showcase for their wonderful songs and harmonies.  Each member of the group sang at least one song. There was a sizeable audience but I wish everyone who later saw The Eagles was in the stadium during their set to witness it, they missed a treat.
I knew the Eagles gig was going to be special when the wonderful Suzy Perry walked past me in Stanley Park whilst I was having a sneaky Malbec out of a plastic bottle. That classy act  kind of blew my opportunity to say 'Hello!'
The Eagles were fantastic. A slick, well-oiled machine that got everyone singing along.  I doubt Vince Gill never escaped the irony of him singing New Boy in Town, but his face frequently burst into a huge smile as the Anfield crowd sang back every word of every song he sang.  Don Henley and Timothy B. Schmit still have their voices and Joe Walsh, well, he's the inimitable Joe Walsh.  "In the 70's I was in my 20's, in the 20's I'm in my 70's" then played the guitar like only he can, mouthing every note. Life, has indeed, been good so far Joe.
Despite leaving the Eagles a few months ago, Deacon Frey came on to rapturous applause, and sounding just like his dad took the crowd on another singalong.
Steuart Smith has been in the touring band for over 20 years, and he is the bedrock upon which many of the songs are built, taking on lead guitar, harmony and rhythm guitar duties.
This was a masterclass in musicianship and songwriting.  No frills, no gimmicks.  Some quality screens with tasteful black and white images.  As Don Henley said 'it's great to be here, although at this stage of the game it's great to be anywhere.  Minimal talking tonight, no pyro, no fireworks, just good music'
He wasn't wrong. Definitely up there as one of the best I've ever seen.
Ps: just a note to say how well organised the buses were into and out of the city centre. Well that was my experience anyway, not sure what it was like at the back of the queue. Admittedly one bus broke down and one reversed into another one to great cheers, swearing and more than a few red faced bus staff,  but apart from that we got in and out pretty sharpish.
PPS...  the seats are Anfield assume you have legs the size of a 7 year old. I think I may be permanently damaged.
NR 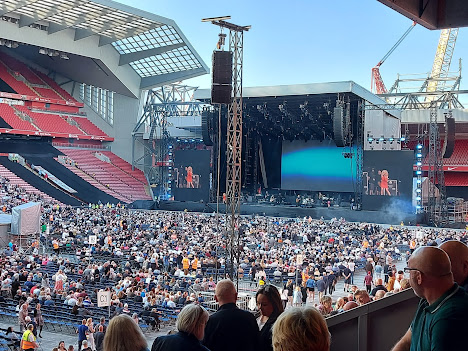 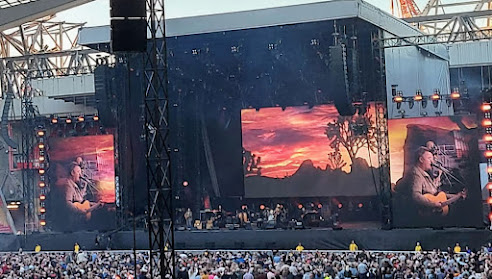