Las Vegas-born-and-based singer-songwriter Franky Perez releases his new single, ‘The Great Divide,’ today from his forthcoming album. Franky also shares the moving video for the single, which features footage from his documentary film, ‘Crossing the Great Divide,’ scheduled to debut at the 2022 SXSW Festival in Austin, Texas next March.

Franky’s album, ‘Crossing the Great Divide,’ will be released in Spring 2022 by Black Sea Music, who say, “We’re excited for this album and to share in Franky’s vision that music has the power to heal and unite.” No wonder, as the album has been described as “beautiful, inspiring and very timely” and contains some of the most inspirational and deep-felt songs of Franky’s career. The notion of the great divide will resonate with many, especially after the difficult, challenging and often divisive times the world has gone through in the past few years.

“The great divide, as it pertains to this album and song, is anything that pulls humanity apart,” says Franky. “Like the rest of the world, I felt isolated and uncertain during the pandemic and the political climate. This song was a direct reflection of the way I felt in that moment. I know it may sound corny, but I believe it wholeheartedly: The only thing that can heal us is love.”

Franky felt the need to help bridge and heal the rifts and wounds, so he set out on a journey crossing the United States on his motorcycle and filming what would become the documentary titled ‘Crossing the Great Divide.’ He performed intimate acoustic shows for frontline healthcare workers and residents at nursing homes and other facilities from Miami to California and traded stories with fellow musicians and entertainers like the Soul Rebels, LP, Randy Travis, Billy Gibbons and Bill Burr. It was a journey of service, purpose, and ultimately self-discovery. Franky’s new album, a companion to the film, was inspired by this experience.

“While we were all safely at home frustrated about our interrupted lives, there were selfless people laying THEIRS on the line for us and our loved ones. I just wanted to show them my appreciation the best way I knew how: a song and a thank-you.

“This trip, with just a motorcycle and a guitar, really grounded me as a performer,” he reflects, “The lights, stage and distance were gone. I was there to not just entertain, but to connect on a deeply personal level. These small shows were some of the most moving and important of my career.” 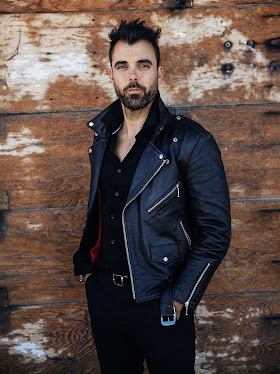