It’s a super-busy and exciting time for award-winning Elles Bailey and her fans. Not only is Elles about to release her eagerly awaited, brand-new album ‘Shining in the Half Light’, but she’s announcing a special album launch show at the live music venue OMEARA (London). What’s more, Elles will be undertaking a special record store tour with her talented guitarist Joe Wilkins.

‘Shining in the Half Light' will be released on 25th February 2022. Three singles have been released, including ‘Cheats and Liars’, ‘Sunshine City’ and ‘The Game’, premiering on Radio 2, and becoming the most played tracks on Planet Rock for multiple weeks. ‘The Game’ has now been added to the A-List on Planet Rock and last Sunday, Elles also did the prestigious My Planet Rocks session with Liz Barnes.

To celebrate the launch of ‘Shining in the Half Light’, Elles will be performing at OMEARA (London) on Tuesday 8th March.

“This special one-off, full-band show will celebrate the release of my brand-new album ‘Shining in the Half Light’ and is the ONLY tour date this side of festival season.“Ticket numbers are limited,” Elles warns, “as we have decided to not sell it to full capacity. So come party with us on 8th March at the stunning Omearal for this intimate and exclusive show!”

“Omeara is the only full-band show,” she explains, “however, I am doing this very exclusive record store, duo tour during release week alongside my compadre Joe Wilkins! Can't wait to come and find you!”

In other news, Elles has just been nominated for yet another blues award: this time for Blues Vocalist of the Year award at the UK Blues Awards 2022.

“I am blown away to have been nominated for Vocalist of the Year at the UK Blues Award alongside these super talents that I also get to call my friends -  Congrats to everyone nominated!”

Tickets are available at ellesbailey.com 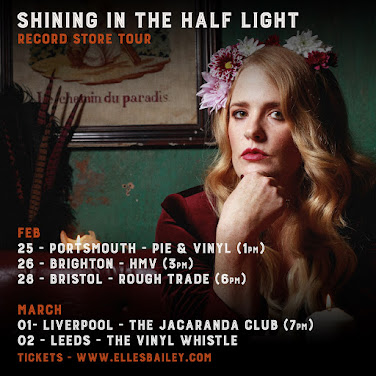