For multi-award-winning, chart-topping singer-songwriter, Elles Bailey 2022 has been a year already. Not only has this talented UK artist earned great critical acclaim, topped genre charts and even appeared on the RADAR of the UK’s main album charts with her fantastic new album ‘Shining In The Half Light’, she’s going to be supporting the legendary Don McLean on his UK Tour this Autumn.

Elles is wowed by the opportunity and says “2022 has already been filled with musical highs and 'Look Mum!' moments but being asked to be a part of this iconic tour is quite simply the cherry on the cake! I can't wait to take the band across the UK once more and share the stage with Don McLean: an artist I have admired my whole life.”Don McLean’s album ‘American Pie’ was first released half a century ago, in 1971. It’s not only his best-known album but a cultural landmark: in 2001, the 8½-minute title track was voted Number 5 in a poll of the 365 Songs of the Century, compiled by the Recording Industry Association of America and the National Endowment for the Arts.‘American Pie’ homages the death of Buddy Holly, Ritchie Valens and The Big Bopper (a.k.a. J.P. Richardson) in a tragic air crash in 1959 and also tells the tale of popular music in their wake in the decade that follows, with nods to Elvis Presley (“The King”), Bob Dylan (“The Jester”) and others. What’s more, Don’s album also includes ‘Vincent’ (often known as ‘Starry, Starry Night’): an exquisite elegy to the life, work and death of painter Vincent Van Gogh.  Don is coming to the UK with his 50th Anniversary ‘American Pie’ Tour: Honoring the Day the Music Died: a 17-date tour, starting in Cardiff on 11th September and playing throughout the country until 4th October, ending at the London Palladium. Elles is delighted to be supporting Don on this tour, particularly as it celebrates a landmark for singer-songwriter music, not to mention an artist whose voice Roy Orbison praised, saying “The voice of Don McLean is one of the great instruments of 20th Century America.”Check out Elles Bailey live, supporting Don McLean this Autumn. Damn fine American Pie – Damn fine homegrown talent!‘Shining In The Half Light’ is now available to download or stream on all digital platforms.  Elles is donating the proceeds from the downloads of ‘Shining In The Half Light’ to War Child to help the children in Ukrainehttps://earache.lnk.to/ShiningintheHalfLight Website  https://www.ellesbailey.com/Facebook: https://www.facebook.com/ellesbailey/Twitter: https://twitter.com/EllesBaileyInstagram: https://www.instagram.com/EllesBailey/YT: https://www.youtube.com/user/ellesbailey 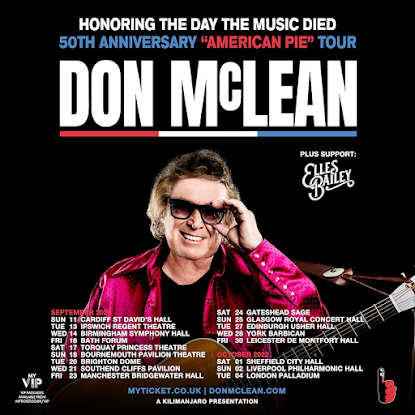