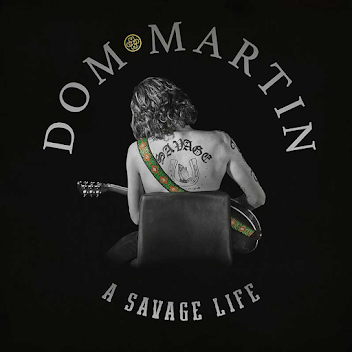 Now and again, you stumble across a rare talent of such sheer genius that you wonder whether what you have witnessed can possibly be for real. Dom Martin is one such talent’ - Blues in Britain

“12 Gauge,” the first single taken from the new album, will be released Friday 28 January and will be available to stream and download from www.dommart.in/music-video

Hailed by many as the blues’ biggest Irish export since the iconic guitarist Rory Gallagher, 2022 looks like it’s going to be ripe for the picking for Dom Martin.

Dom will embark on an extensive autumn headline UK tour to promote the new album, which will also include festival performances.

Produced by Grammy Nominated Chris O’Brien, “A Savage Life”was recorded in Belfast and Dublin during the second half of 2021. The new album features all songs arranged by Dom (guitar and vocals), with stellar musicianship from Dave Thompson (bass guitar) and Laurence McKeown (drums).

“So, this is the dreaded second studio album,” says Dom. “In some respects, the new album is like my 2019 debut album “Spain to Italy,” but still very different,” says Dom. “It’s a mixture of acoustic solo and electric just like the first one, however, on this new one, I really wanted to keep this album under-produced so I can reproduce the tracks in a live setting. Similarly, to the Spain to Italy album, the tracks on A Savage Life are mostly based on my own life experiences.”

“I seldom like listening to my own work, but I am proud of what I’ve done on the new album. I think I’ve got that under-produced sound I wanted. Many of the tracks were just one take and that’s the way I like it.”

“A Savage Life is another part of my life story and is also, in a small part, in memory of a great friend who passed away in 2021. It’s my blues, it’s real and I have to live with it!”

All Songs arranged by Dom Martin

UNSATISFIEDI wrote this halfway through recording the album after changing my mind about another planned track. I was unsatisfied with the direction it was going.

HERE COMES THE RIVERMy second brush with a loop pedal. I have a Boss RC300 that has gotten the better of me so far. I bought the cheapest and smallest one I could find, and this song was the first thing that came out of the guitar, and I decided to put it on the album. I recorded this on the penultimate day of recording. It is about drowning in despair of the music industry and how it works or doesn’t.

BLUES ON THE BAYWhen I was younger, I was on the party trail around various places and music festivals. There is a local festival in the North of Ireland called Blues on The Bay. I saw a great local blues man called Mark Braidner and thought I would love to play there someday. A couple of years ago I got that call, and I wrote this song in tribute to the festival and my childhood dreams and fulfilment.

THE MAN FROM NOWHEREMy story so far really, being out on the road as a man from nowhere who nobody knows!

12 GAUGEI wrote this about 8 years ago and I was drinking at the time so I’ve no idea where it came from. I guess it was whatever was in my head at the time, just leave me alone. It is only now that I’ve got it the way I want it to sound. High tempo and punches you in the face.

ECHOESA song about loss and finding things that used to belong to souls that have passed on. It’s sort of a Celtic mystical piece and primarily it’s for my late father and my mother.

DRINK IN BLUE COLOURSThis is about as jazzy as I get. I fell into this accidental chord structure as I was doing something else, and it really sounded good. The song has great dynamics and is based on drinking away your sorrows. It’s a dark and vocally torturous song.

ADDICTI reckon I was about fifteen when I wrote this. It is a glimpse into my teenage years and what I was getting up to but there is also a negative side.

MAXWELL SHUFFLEIt’s an instrumental for my great late friend “Flash” Gordon Maxwell who passed away in 2021 while we were recording this album. It’s a mixture of the influences that he enjoyed with various style changes with rip roaring guitar, bass, and drums. We have created a new thing, a Celtic power trio shuffle. I think Rory Gallagher would have liked this one.

THE PARTING GLASSThis is a traditional arrangement of an old Scottish lament written around the 1760’s by persons unknown. It is frequently played at Celtic wakes and the very morning I was recording this for Gordon after his cremation. We certainly did not plan that, but it was very moving for all involved. Rest easy brother, we all loved you and thank you for everything you did for me