Matt Pearce and The Mutiny’s mighty, much-anticipated second album ‘The Soul Food Store’ can now be pre-ordered, and as an entrée a digital double A-side single: ‘All The Gods’ and ‘Beautiful Disguise’ is being released — a tempting sample of the Store’s top quality wares.

“I wanted to put out two very different songs as a preview of the album,” Matt adds, “as it’s intentionally a very varied collection of songs: variety being the spice of life and more besides in The Soul Food Store! “’All The Gods’ is a psychedelic rocker of a tune, intense and moody; whilst ‘Beautiful Disguise’ is a song I’m very proud of: I wanted the sound of Sixties Soul, complete with lush keyboards and swooning strings, and I think we got that.“Enjoy these aperitifs ahead of the main course being served on April 29th. Bon appetit!” ‘Gotta Get Home’ kicked off Matt Pearce’s musical mutiny and went to #1 in the Amazon Blues charts. Like its predecessor, ‘The Soul Food Store’ is self-produced and features Matt as lead vocalist, guitarist and songwriter, aided and abetted by some of the crème de la crème of the London blues scene. The 11-track sophomore album will be released on 29th April through Mutinear Records and is filled with rocking blues and funky, soulful grooves: the kind of flavoursome, nourishing sound that Matt adores and set out to create when he first began his musical mutiny — smokin’ hot songs delivered with passion and virtuoso skill. Reviewers, press and broadcasters have been blown away by this new album. Guy B. of GREAT MUSIC STORIES awarded ‘The Soul Food Store’ 5/5 and made it Album of the Month: “Imagine Joe Cocker, Santana, Prince, Stevie Wonder and The Beatles having an impromptu late-night jam. The result might sound like the music on ‘The Soul Food Store’ – this album is a tribute to the freedom of music to engage, lift and inspire. This music flies free.""Never was an album more aptly titled,” says music journalist Steve Swift  “… I think this album is gonna be one of the best of the year."For Fireworks Magazine, the album is "A classy, well-crafted record with something to please everyone. Impressive!" and HRH Magazine reckon "No matter what your musical preference is, there is something there for everyone, it feeds your soul and leaves you hungry for more." The double A-side, All The Gods/Beautiful Disguise will be available on all digital platforms Friday 22nd April. Pre-Order ‘The Soul Food Store’ now and get it delivered to you by the release date of 29th April, and as an incentive to part with your hard-earned pennies early, on the release day, you’ll also get the link to an EXCLUSIVE 7-track ‘Acoustic Soul Food’ mini-album, PLUS videos for 4 of the songs. And why not treat yourself to a bundle of a signed album + a new t shirt or two? Check out the details via the link below and happy shopping!  https://mattpearceandthemutiny.noisemerchants.com/ Check out Album teaser here …https://youtu.be/hNY4lzdHfHc  Website: www.mattpearceandthemutiny.comFacebook: https://www.facebook.com/mattpearceguitarTwitter: https://twitter.com/mattpearceukInstagram: https://www.instagram.com/mattpearceuk/YouTube: https://www.youtube.com/mattpearceguitar 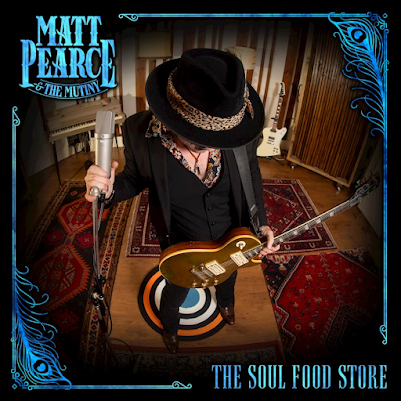 "Imagine Joe Cocker, Santana, Prince, Stevie Wonder and The Beatles having an impromptu late-night jam. The result might sound like the music on ‘The Soul Food Store’ – this album is a tribute to the freedom of music to engage, lift and inspire. This music flies free."GREAT MUSIC STORIES - 5/5 Album Of The Month "Never was an album more aptly titled... we're only in March and I think this album is gonna be one of the best of the year."STEVE SWIFT "Classic, pulsating blues-rock... a varied set with elements of Latin, funk and soul, absorbed into a sound perfectly poised between blues and rock."RNR MAGAZINE "Stand back and feel the energy and soul oozing from this incredible record, this is a real contender for album of the year for sure."JACE MEDIA "A classy, well-crafted record with something to please everyone. Impressive!"FIREWORKS MAGAZINE "No matter what your musical preference is, there is something there for everyone, it feeds your soul and leaves you hungry for more."HRH MAGAZINE "A freshly made, tasty slice of musical goodness... a funky dollop of up-tempo, soul-swinging horn-backed deliciousness... funkadelic soul-blues of the snappiest order... I’m immediately going back for seconds."FABRICATIONSHQ "An album packed with funky rock tunes. Music to make you move and groove, a crowd-pleasing album. Check out the guitar soloing… wow."GAMES, BRRRAAAINS & A HEAD-BANGING LIFE “Matt Pearce & The Mutiny have a winner on their hands with The Soul Food Store, one that should open a lot of doors for them this year. Highly recommended.”ROCK & BLUES MUSE “Got A Thing Going On is four feisty testosterone fuelled minutes of rock and roll vibes with two blazing guitar solos.” PLANET MOSH